Jae Auri from Louisville, KY was born on an Easter Sunday, in the Chinese year of the Dragon, as an almighty left-handed Aries. She feels as though she was destined for something epic. She spends her days learning new things and figuring out her purpose in life. Blessed to be a writer, she has been expressing her artistic side a little over a decade, probably even longer. She is a classically trained violinist and self-taught pianist, but she has always held a strong affinity for Hip Hop. Her collection of music is by far the most extensive anyone she knows has seen and it inspires her every day. She thinks something new can always be found in music. No matter how you are feeling, music has the ability to inspire you. The Throne, Frank Ocean, Marsha Ambrosius and Wale are in heavy rotation on her iPod at any given time of the day.

Jae started modeling March of 2011, shocking the Carters as she showed up on set, in heavy grey sweat pants and a 3XL Don Corleone shirt. She came through the doors of Blackbox Visions Photography Studio in Stone Mountain, GA to shoot for an hour and shot

Shortly after the weekend in Atlanta, Nat shared Jae with the world, exposing her to hosts of other people. They have shot together on numerous occasions, with no sig

ns of stopping or even slowing down. Working for BBV has enabled her to shoot on houseboats, yachts, MVP Studios in Louisville, KY, Piedmont Park, Mixx Factory, and a series of undisclosed locations.

She claims that modeling has become a liberating pastime and a surreal experience, as she originally

planned to go into marketing and merchandising in which she has dual degrees. Her ultimate goal is to have as much fun as possible and learn as much from experiences. She plans to take on all tasks given to her, taking in the places and networking with the people she probably would not have met otherwise.

Jae believes her family is the definition of a support chain. No matter how far she goes from home, it’s as if they are always with her. She grew up with a strong connection to her great-grandmother and thinks she was blessed with many of her attributes. Her entire family and host of wonderful friends should be given credit for Jae’s success as she would not be where she is without them. They take support to all new levels and she loves them all for it. She has two beautiful, amazing, brilliant daughters. They keep her humbled and teach her something new each day.

Jae works out… but not in the most traditional way. She refuses to reveal her secret, but admits that she loves fried food. Her measurements are 34-26-36. Her favorite physical attribute is her hair. Jae is a huge fan of extra big, dark grey sweatpants. She has four pair. Jae has one tattoo on the back of her left shoulder in honor of her left-handed great-grandmother. “She always said, “Our family is blessed.” She is in the planning stages for two other tattoos to come this year before summer. 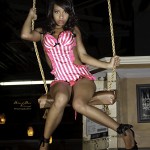 Her favorite alcoholic beverage is Jamaican-Me-Crazy, but she is not much of a drinker. She loves lemonade. Her favorite color is green. Her favorite television show is Pretty Little Liars and she is impatiently waiting for the release of Hunger Games to be her new favorite movie. Her special talent is her left arm football throw which she claims is “atrocious”.

If you need to get a hold of Jae, you can follow her on [email protected] Orange Mode readers food for thought, besides make sure you get your Nine Livez on. Always remember: Amateurs built the ark, professionals built the Titanic. Never underestimate yourself.