from Bishkek, Kyrgyzstan, age 31, half Tajik, half Kyrgyz, passion is to dance her national dance and study

modern dance. She loves urban and R and B, she states she likes modern “her dance best” and she likes learning foreign languages. She does not want to be an interpreter but likes to speak the same phrases in different languages Russian, Kyrgyz, Uzbek, English, especially Spanish. She is in the process of learning how to speak Spanish. 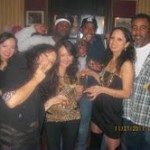 She studied many professional dance styles. She states, “national, I mean Asian dance style Arabic.” She has been expressing her artistic side since childhood. Her mom wanted her to be a professional dancer. She has visited many dance classes, and she still enjoys dancing. She travelled around her country and performed countless concerts. She learned the modern national dance of her country. She says, “I like more modern “my style” hehehe.

That is me!” She performed her national dance many years ago at a time when it was Soviet Union. Soviet Union dissolved in 1991 and formed Kyrgystan, Kazakhstan, Uzbekistan. The cities she performed in Jalal-Abad, Osh, Andijan ,Fergana, Tashkent, and Alma-ata.

Historical facts and data: The Supreme Soviet vote declared independence from the U.S.S.R. on August 31, 1991. http://www.state.gov/r/pa/ei/bgn/5755.htm
The subsequent dissolution of the Soviet Union, Kazakhstan declared independence on December 16, 1991.http://www.state.gov/r/pa/ei/bgn/5487.htm
Historical facts and data: Uzbekistan was the first central Asian republic to declare that its own laws had sovereignty over those of the central Soviet government. Uzbekistan became fully independent and joined with ten other former Soviet republics on Dec. 21, 1991, in the Commonwealth of Independent States.
http://www.infoplease.com/ipa/A0108128.html?pageno=2#ixzz1mhahgXdJ

Uma likes her country better since it is not the Soviet Union because, she states, “there was no information, no free mind, no free life… All had to do what the Government wanted… “It is my opinion.” Discipline was better when it was just Soviet Union. She responds, “Well, all we are not the same, different, different mind, wishes. Something is better but I can say that all is better now. All sides have minuses and pluses.”

Her best attribute is she is outgoing, loyal, can click with anyone, and people value her friendship, making

her a social butterfly. The main people, who inspire her, are her three beautiful Princesses, ages 8, 6, and 3. They make her move forward and feel the beauty of her colorful life. She says, “It’s funny, sometimes they teach me, how to live.” Her

support chain is her family. She has a big family; they always treat each other very well. They support and help each other. They make the decisions together concerning the family. She loves her family, replying, “Mom, you are the ONE!”

Uma has one sister and two brothers. Her sister is 35 years old, lives in Moscow, and she is citizen of

Russia .Uma is not a citizen of Russia like her sister. Her sister wanted to live in Russia with their father because she had so many friends. The past time Uma seen her sister was last year, she visits every year when she gets vacation. Her older brother, age 33, is married, has two sons, and works with her at Beta Stores. Her younger brother, age 29, works and lives in Moscow.

Uma is single. If she had a choice of any man in the world, she would want his characteristics to be, strong,

honest, to be a gentlemen and be hers and only hers. In an ideal man she says, “of course like all women I notice appearance, if he is my kind of man, I try to know him more, I mean everything, what he’s doing now, and what he likes.” You are a romantic, you like to be wined and dined, be treated like a queen? She replies, “yes hehehehe and for me important personality.”

If you come to Bishkek, Kyrgyzstan you should visit “Metro Pub” where you can enjoy American food and good service. The best club in the city is “Good Zone”. They have live music of different genres till midnight, and after that is club music. She states, “I have danced there a lot of nights.” She loves dancing, while dancing she can forget about everything, it seems like you are on another Planet.

She works out three times per week. Her favorite drink is “Jack & Coke”. Friends call her “Miss Jack & Coke”. Her favorite color is Orange. Her favorite TV shows are “The Help”, “The Game”, and “P. S. I love you” and her favorite movies are dramas. Her hobbies are reading horoscopes, astronomy and characters of people are interesting.

She works a lot to satisfy all her needs. She prefers brand clothing; she follows fashion

creating her own style by herself. She states, “Just like that!”

Good restaurants in Kyrgyzstan, Bar 12, Bella Italia, Bellagio, Buddah Bar. A national dish to eat from Kyrgyzstan:
plov
lagman
manty
beshparmak
samsy
shorpo
She states, “These are the best ones.”

Uma thinks people shouldn’t live just “because”, live to enjoy, love everything you already have, it’s all in what you have done in gaining control of your life. If you need to find Uma she works a lot at her cell phone shop, “Beta Stores-1”, 2d floor, # 243. She can help with any information about phones. You can contact Uma on Facebook and at [email protected]

Pamir). These two systems are geologically separated from each other in southern Kyrgyzstan, between the Alai Mountains of the Tian-Shan and the Trans-Alai Range (Qatorkuhi Pasi Oloy) of the Pamir. The Trans-Alai Range, which is the northernmost part of the Pamirs, forms part of Kyrgyzstan’s southern border with Tajikistan. The main ridge of the Tian-Shan extends along Kyrgyzstan’s eastern border with China, on a northeastern axis. Victory Peak (known as Pik Pobedy in Russian and Jenish Chokosu in Kyrgyz) is the highest peak in the Tian-Shan system at an elevation of 7,439 m (24,406 ft). Located on the Kyrgyz-China border in northeastern Kyrgyzstan, Victory Peak is also the highest point in Kyrgyzstan and the second highest peak in the former USSR. A series of mountain chains that are part of the Tian-Shan system, including the Alatau ranges, spur off into Kyrgyzstan. Most of these ranges run generally east to west, but the Fergana Mountains in the central portion of the country run southeast to northwest. The Fergana Valley in the west and the Chu Valley in the north are among the few significant lowland areas in Kyrgyzstan.
http://www.kyrgyzstan.orexca.com/